1998 Pinnacle Performers was a 150-card, single-series, entry-level set that was the re-branded, second iteration of the 1997 Pinnacle X-Press product. Released in July 1998, this product was Pinnacle Brands' penultimate baseball card product that was officially released prior to their bankruptcy that same year. This set continued with the second iteration of the "Swing for the Fences" game/contest for collectors. Base cards featured a color player photo with a team-colored, off-set border background. There were two subsets and Checklists at the end of the set:

There were no Rookie Cards in this set. 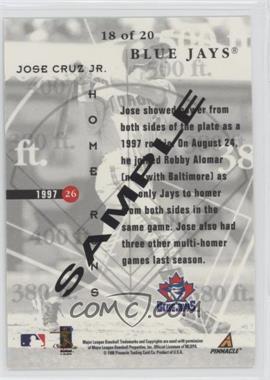 Promotional samples of the Big Bang insert set were distributed within wholesale dealer order forms prior to the product's release (one card per order). These promos looked the same as the base Big Bang inserts except they had word "SAMPLE" is printed in large black ink that ran diagonally across the back of the card and were not serial-numbered. 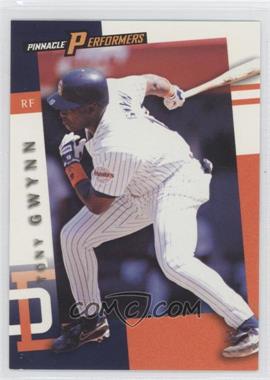 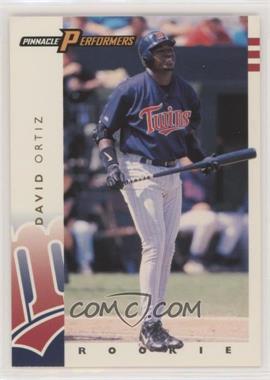 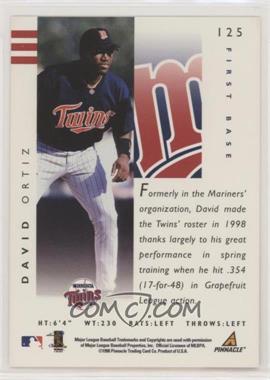 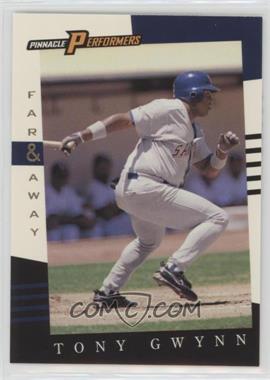 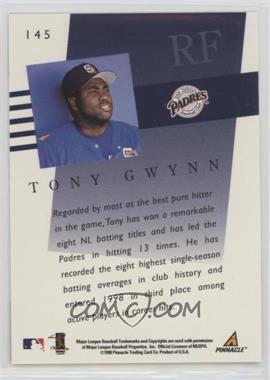 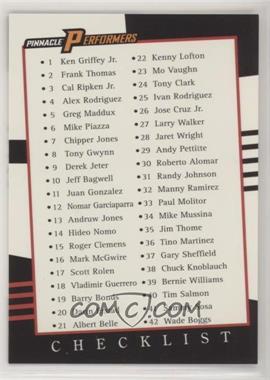 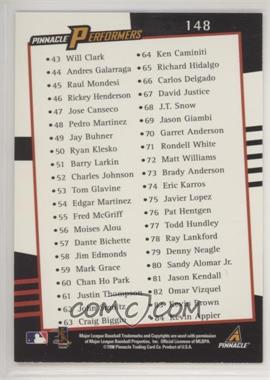 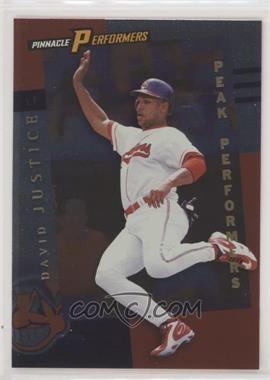 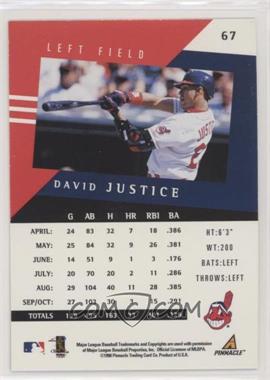 All 150 cards in the base set were available in a Peak Performers parallel that utilized the same photo and design as the base set but differed as the entire card was given a foil finish, featured gold foil accents on the nameplate, and had "PEAK PERFORMERS" printed on the card front. 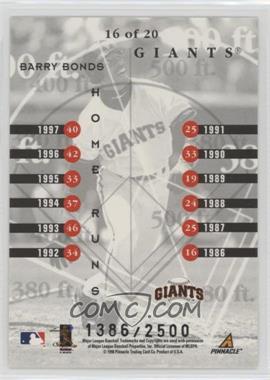 This 20-card set honored the top home run hitters in the game on a silver etched-foil background. Each card is serial-numbered to 2,500 copies. 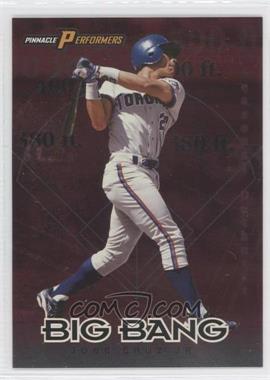 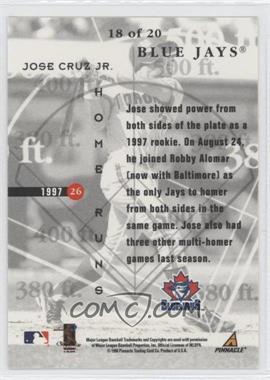 All 20 cards in the Big Bang insert set were available in a Seasonal Outburst parallel that featured a red etched-foil finish and a serial-number equal to the number of home runs that player hit in the 1997 season. However, a number of non-serial numbered cards emerged on the secondary market over the years, with some or all leaking out after the Donruss/Leaf/Pinnacle parent company bankruptcy in 1998. Collectors speculate that there are more non-serial numbered Seasonal Outburst parallel cards in circulation than there are serial-numbered ones.

The number following each player represents the amount that player's Big Bang Seasonal Outburst card is serial-numbered to.

NOTE: Ken Griffey, Jr.'s Seasonal Outburst parallel is erroneously serial-numbered to 57, instead of 56 (the number of home runs he hit in 1997), and is an uncorrected error. 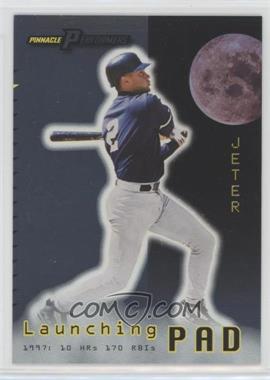 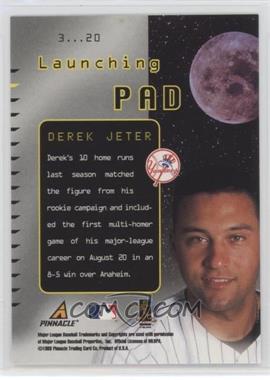 This 20-card set highlighted top young and/or established hitters in the game on an all-foil card front with a space-themed background. 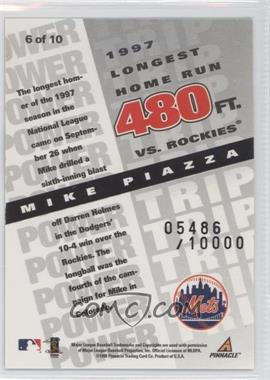 This 10-card set highlighted the top home-run hitters in the game on a silver and red etched-foil background design. Each card is serial-numbered to 10,000 copies. Similar to the Big Bang Seasonal Outburst cards, a number of non-serial numbered versions emerged on the secondary market after the Donruss/Leaf/Pinnacle bankruptcy in 1998.

Swing for the Fences 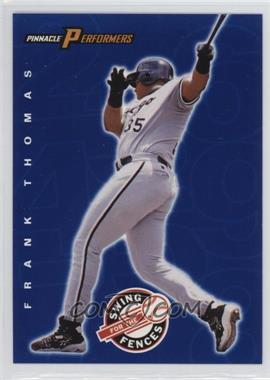 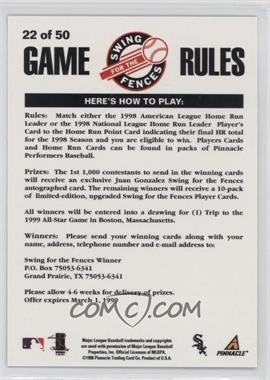 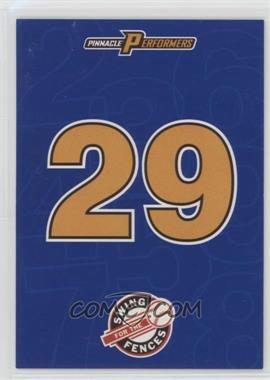 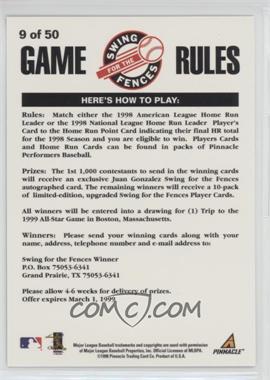 Similar to the promotion in 1997 Pinnacle X-Press, Swing for the Fences was a game for collectors to play utilizing cards inserted into Pinnacle Performers packs, featuring 50 of baseball's top long-distance hitters. The object of the game was to identify the 1998 Home Run Champion from either the National or American League and match it with the exact number of home runs he hit during the 1998 season by using a combination of 2 cards:

Each 8-card wax pack contained either a Swing for the Fences Player card or a Point card.

Swing for the Fences Upgraded 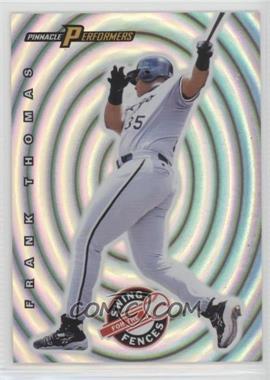 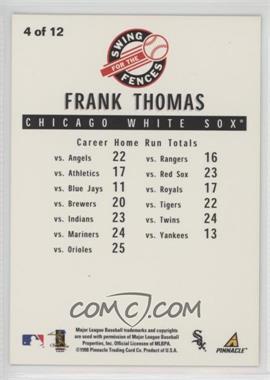 These Upgraded Swing for the Fences cards were supposed to have been distributed directly to Hobby dealers and thus collectors could receive these packs directly from participating Hobby dealers rather than from Pinnacle. However, Pinnacle Brands filed for bankruptcy before the end of the 1998 season - wiping out the contest - and the Upgraded cards were never officially distributed. Similar to other cards in this set and other sets planned for release after August 1998, these cards eventually emerged on the secondary market after bankruptcy.

Further, the first 1000 entries were to have received a special autographed Swing for the Fences Upgraded card of Juan Gonzalez. All entries also would have been entered into a drawing for a trip for two to the 1999 All-Star Game in Boston. However, due to Pinnacle's bankruptcy, the Juan Gonzalez Upgraded Autograph cards were never produced. 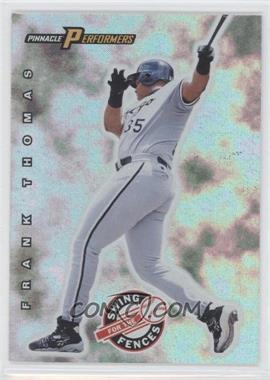 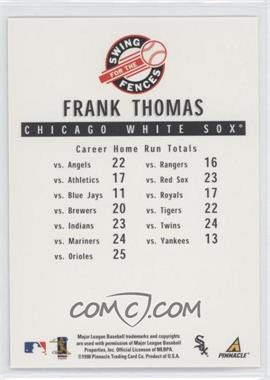 This 12-card partial-parallel to the Swing for the Fences insert set was created as a promotional tie-in for Hobby shop owners and was first released at the 1998 All-Star Game FanFest, which was sponsored by Pinnacle Brands, Inc. Cards from this set were subsequently distributed to shop owners, nationwide, in 10-card packs.

Collectors that purchased three packs of 1998 Pinnacle Performers could take the wrappers to their local participating Hobby store and receive a single Shop Exchange card. Collectors that purchased an entire box would receive a 10-card cello pack of all Swing for the Fences Show Exchange cards. These cards utilized the same player photo as the base Swing for the Fences cards but were printed on 20-point card stock and featured a silver holographic design and were not sequentially numbered on the back.

Randomly inserted into packs was a coupon good for a Major League Baseball autographed by Texas Rangers star Juan Gonzalez. However, due to Pinnacle's bankruptcy, the redemption program was cancelled. It is unclear if Gonzalez ever signed any baseballs for this promotion.