1999 E-X Century was produced by Fleer/Skybox and was a 120-card set distributed exclusively to Hobby outlets. For a fourth consecutive year, this brand continued its theme of depth on a card through the use of multiple card stock layers. Similar to the previous year's set, acetate was the foundation for each base card: The "top" layer featured the player photo over a colored holographic crescent that accented the player's team colors. This layer was embedded in the the transparent, uncolored "bottom" acetate layer, which featured the player nameplate and position in silver holographic foil, his team's logo, and the "E-X Century" logo in etched foil; additionally, this same layer of acetate also featured a shadow of the player's nameplate and an enlarged shadow of the player's team logo that was offset to create the illusion of a 3-D effect on the acetate. Due to the majority of the card being acetate, the card back was a non-holographic mirror image of the front.

The set contained a 30-card Rookie short-printed subset (91-120) that was inserted at a rate of 1:2 packs. The only notable Rookie Card in the set was of Pat Burrell.

The numbering of the base set was subjectively arranged to have top current stars in the game featured first in the set, semi-stars next, minor-stars after, and the young stars featured last - this arrangement was key to the serial-numbering rationale for the Essential Credentials parallel sets.

Inserts and parallels were usually the 2nd/middle card in the pack. 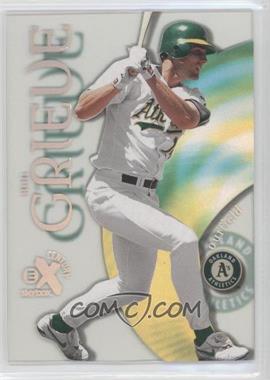 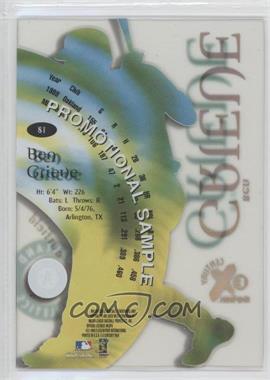 A promotional sample card featuring Ben Grieve was distributed to dealer accounts and Hobby media shortly before the product's national release. This card resembled Grieve's base card but had "PROMOTIONAL SAMPLE" text printed across the back. 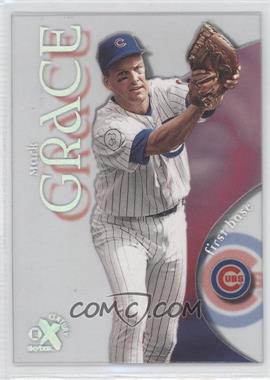 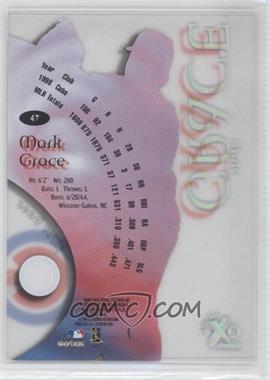 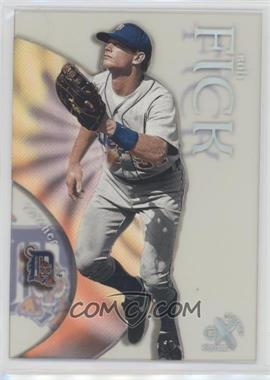 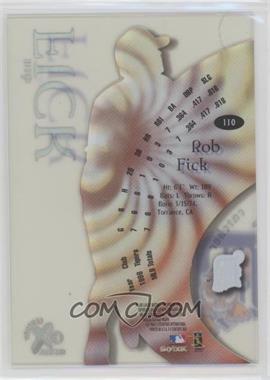 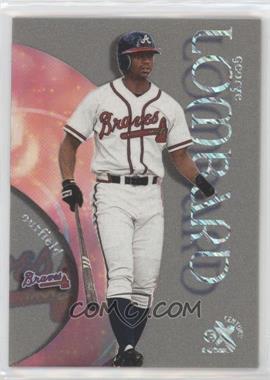 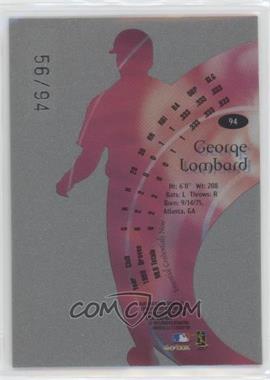 Essential Credentials Now featured a silver theme finish to the card. For each player in this parallel, the team-colored holographic foil from the base design remained but the acetate layer was silver and opaque. Additionally, the player's nameplate, "E-X Century" logo, and position text were given a silver holographic "shading"-foil finish. "Essential Credentials Now" was printed on the back, along with the serial number. 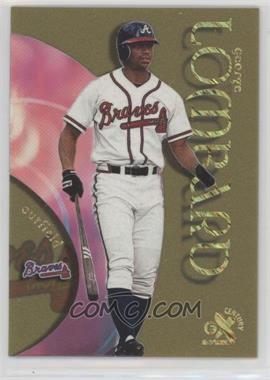 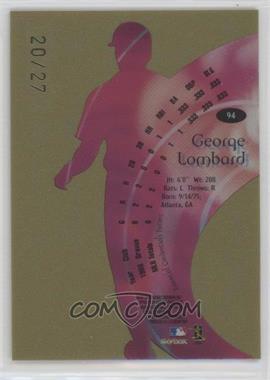 The serial-numbering for the Essential Credentials Future parallel was determined by subtracting the player's card number in the base set from 121. Again, due to the arrangement of players in the base set, the top current stars were featured first while the young stars were featured last - thus, the potential "Future" stars of the game featured the lowest serial-numbering in the Essential Credentials Future set.

Essential Credentials Future featured a gold theme finish to the card. For each player in this parallel, the team-colored holographic foil from the base design remained but the acetate layer was gold and opaque. Additionally, the player's nameplate, "E-X Century" logo, and position text were given a gold holographic "shading"-foil finish. "Essential Credentials Now" was printed on the back, along with the serial number.

For the sake of brevity, the individual serial-number production figures for each card are not listed here. 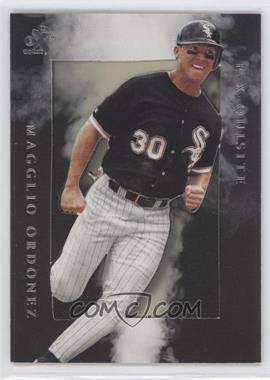 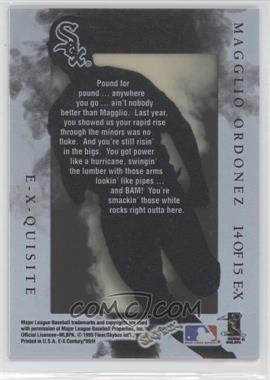 This 15-card set featured some of the top young players in the game. Each card was printed on grey-black stock with an interior shadow-box die-cut design that revealed a transparent, sky-themed acetate. This design mimicked the design from the 1997 E-X 2000 base set. 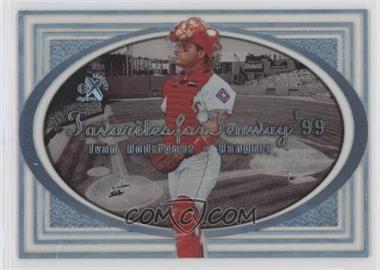 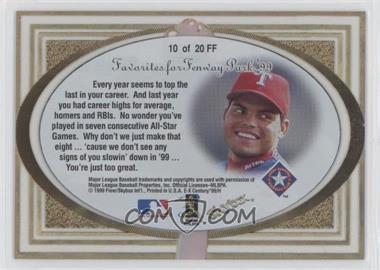 This 20-card set featured players that had a strong probability of participating in the 1999 All-Star Game. Each card was composed of clear acetate, silver-blue etched foil on the front, and gold etched foil on the back. The center of each card featured a picture of Fenway Park - home of that year's ASG - printed on acetate.

Milestones of the Century 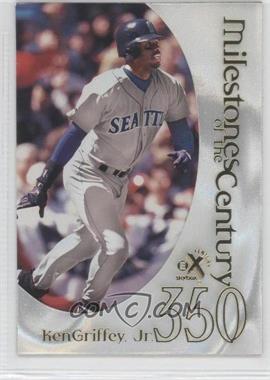 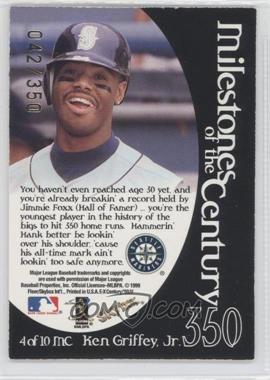 This 10-card set honored individual player records/statistical achievements accomplished in the 1998 season. Each card featured a color player photo and a silver-grey portion of the card that featured the insert name and the number representing the specific "milestone" - this number represented the serial-number that each player's card was numbered to. 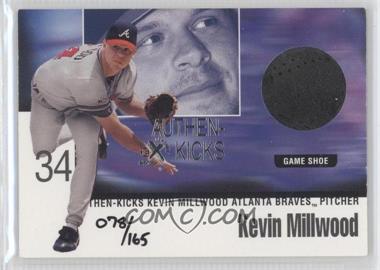 This nine-card set featured top young players in the game with swatches of their game-worn shoes embedded in the cards beside black-and-white head shots of the player in purple-sky background. Each card is hand-numbered and the print run for each is listed below.

In addition, Fleer had J.D. Drew autograph 16 copies of his card; eight in red ink and eight in black ink.