1993 Finest (officially "Topps Baseball's Finest") is a 199-card set printed on chromium stock and widely recognized as one of the most important issues of the 1990's. The Finest brand was Topps first attempt at the super-premium card market and competed with Fleer's Flair brand and Upper Deck's SP.. Production was announced at 4000, 12-box cases and cards were distributed exclusively through Hobby dealers in the fall of 1993. This was the first time in the history of The Hobby that a major manufacturer publicly released their production figures.

Because production figures were released, it is believed that there are approximately 30,000 copies of each base card, 1500 of each Jumbo card, and 241 of each Refractor. Some people claimed that additional refractors were backdoored to several card shops and dealers in the San Diego area -- although this was never proven.

Cards were issued in seven-card foil fin-wrapped packs that carried a suggested retail price of $3.99. The product was a smashing success upon release with pack prices immediately soaring well above the $20/pack point. The popularity of the product has continued to grow throughout the years as it's place in Hobby lore is now well solidified.

Due to these boxes not having a logo printed on the plastic wrap, boxes can easily be opened and resealed. Many boxes with the original plastic wrap have a small round hole in the upper left corner on the front. Also, packs that contain a refractor can be easily identified as they are different than non-refractor packs as they were were printed and packed separately. Packs containing a refractor have a printing variation on the wrapper. 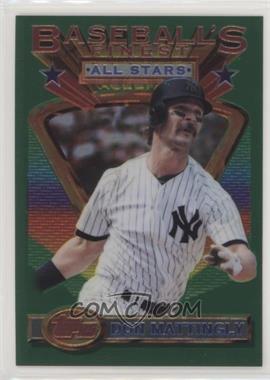 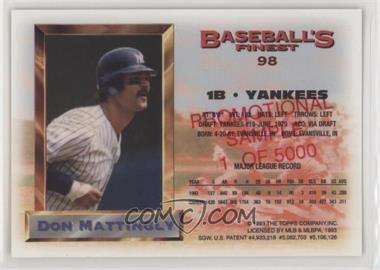 Topps distributed 5000, three-card, sets to its dealer customers to promote the release of its 1993 Topps Baseball's Finest set. The standard-size The words "Promotional Sample 1 of 5000" appears in red lettering superposed upon the player's biography on the back of the card. A limited amount of these cards were issued as refractors; however, the production is unknown. 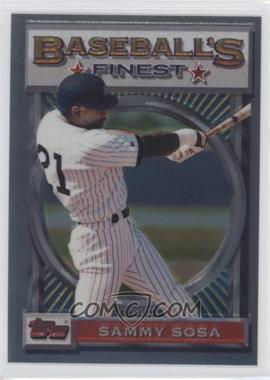 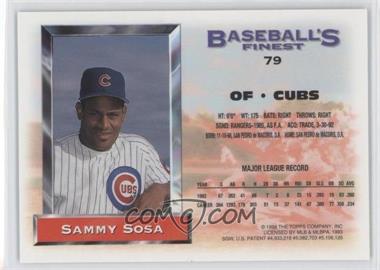 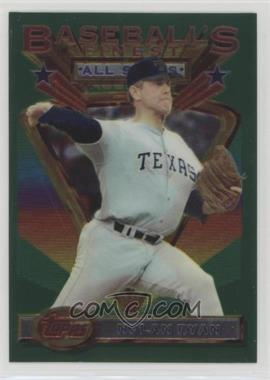 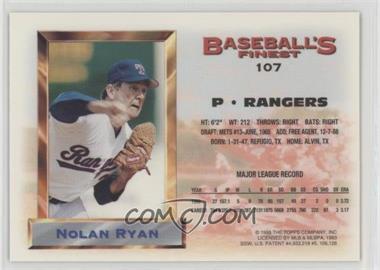 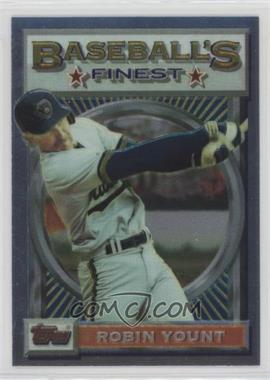 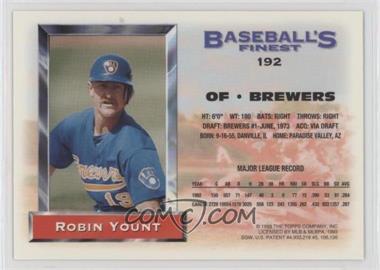 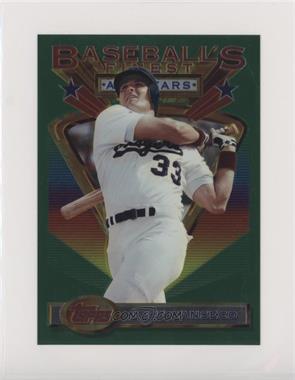 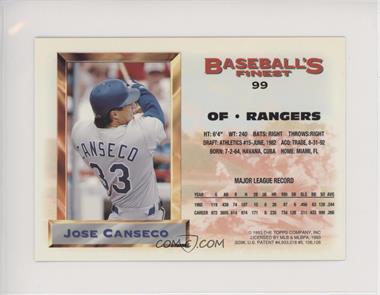 These over-sized (approximately 4" by 6") cards were inserted one per sealed box of 1993 Topps Finest packs and feature reproductions of 33 players from that set's All-Star subset (84-116). Some hobby dealers believe because of the known production numbers that slightly less than 1500 of each of these cards were produced. 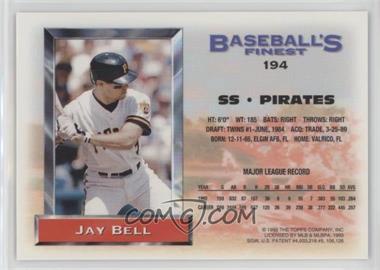 Randomly inserted in packs at a rate of one in 15 (mostly one-per-box, occasionally two), this set parallels the entire 199-card Finest set except that their fronts have been laminated with a plastic lens giving the card its trademark appearance. Because of the known production numbers, these cards are believed to have a print run of 241 copies of each card -- although this production figure was never officially confirmed by Topps. It is believed that there might be short printed cards in this set. Topps, however, has never publicly released any verification of short-printed singles, but some of the singles are accepted as being tough to find due to poor distribution and hoarding.

Some examples of such hoarding: Andre Dawson was known to pay premiums of up to three-times Beckett HI value for copies of his own '93 Finest Refractor, and one collector claims to have 122 copies of Randy Meyers's Refractor -- that's a little more than half the known production run.

Due to their high value, these cards are extremely condition sensitive, with much attention paid to centering and minor scratches on the card fronts. Due to the subjectivity of card grading, some claim to have resubmitted the same refractors several times over the years to achieve a higher grade.