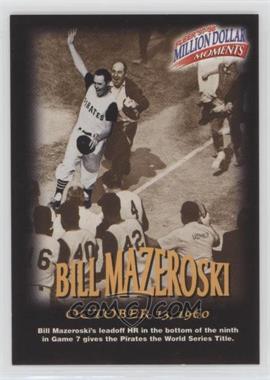 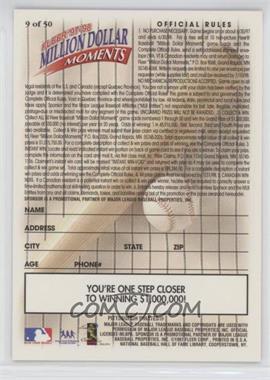 1997 Fleer Million Dollar Moments is a 50-card, cross-brand, insert set included in a variety of late-year 1997 and early-year 1998 baseball packs. These 50 cards have a mix of retired legends with contemporary stars, highlighting some of the key moments in baseball history. The first 45 cards in the set are, by far, the most common to find. Cards 46-50 are extremely short-printed with each card being tougher to find than the next (It is believed that Fleer only produced a single copy of Joel Youngblood's card.). Prior to the July 31st, 1998 deadline, collectors could mail in their 45-card sets (plus $5.99 for postage and handling) and receive a complete 50-card exchange set.

Lucky collectors that managed to obtain one or more of the SPed cards could receive a shopping spree at selected Hobby shops. Each SP card had to be mailed in along with a complete 45-card set to receive the following shopping allowances:

A grand prize of $1,000,000 cash (payable in an annuity of 20 annual $50,000 increments) was available for the one lucky collector that could obtain and redeem the complete 50-card set. It is unclear is anyone ever claimed the million dollar prize.

Fleer also produced similar Million Dollar Moments sets for basketball and football, with those sports also offering a $1,000,000 grand prize. Like with baseball, it is unclear if the football and basketball million dollar prizes were won.

In addition, 10,000 instant winner cards per sport (good for an assortment of stuff including shopping sprees, video games, and, of course, Fleer cards) were randomly seeded into packs.

One card in every pack of... 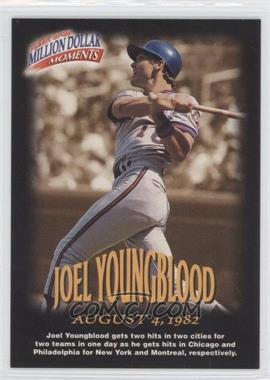 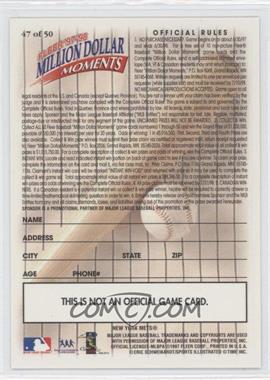 NOTE: The 50-card Redemption set is IDENTICAL to the cards inserted into packs EXCEPT...

In an act of extreme laziness, the backs of the Redemption cards have the same legalese and fine print as the pack-inserted cards.